Don’t throw your voting papers away

If you would like your building society to be a genuine mutual then vote “AGAINST” everything on the ballot paper.

If you are unhappy with directors taking so much of your money every year then vote “AGAINST” everything on the ballot paper.

Never use the infamous “Quick Vote” or use selective voting.

Selective voting “FOR” directors simply ensures that every director will be elected and they are all responsible for the infamous “Quick Vote“.  A vote “FOR” anything will have no effect on governance or accountability.

Directors help themselves to ever larger amounts of members’ money and every year they use the infamous “Quick Vote” to get members to support them.

Voting was intended to be concerned with the business of the society.  But the directors have downgraded it to appear simply as a method for donating your money to a charity that is not of your choosing.  Your vote is then perceived to have no connection with the business.

Is it Fair to Criticise “Your” Nationwide (Building Society) Directors? 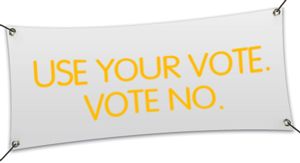 Members of building societies tend to believe that whatever they do will have no effect on the way a society is managed and will not affect either their savings or their mortgages.  For the election of directors (and resolutions for their remuneration) this would appear to be true as they are already appointed to the boards often as “old pals”.

Some ballot papers include a strongly highlighted “Quick Vote” or “Fast Track” option others have become like works of art and may even include tick boxes carefully concealed in the small print.  All of this is done in an effort to ensure that members will vote in accordance with the wishes of the board of directors.  You can be absolutely certain that such underhand practices are not for the benefit of members.

Banks do not use such underhand practices.

But members should be aware that if an election includes a candidate who is challenging the “old guard” by standing in opposition to the appointed directors they do have a genuine choice and a genuine chance to make changes for their own benefit.  An independent candidate will obviously not, if elected, support undemocratic ballot papers but will act on behalf of members rather than for the benefit of directors. In such cases it is essential to vote ONLY FOR the member candidate and no one else.

Directors have made it very difficult for any member, no matter how highly qualified, to stand as an independent candidate for the board.  They must be nominated by no less than 250 qualified members. Not an easy task when put into practice.  Appointed directors are not required to have any nominations at all and may not even be required to be existing members of the society.

Directors make it as difficult as possible for independent candidates and as many as 50% of nomination forms may be rejected so that nominations may need to be obtained from 500 members to ensure that 250 will qualify.  In addition they have to overcome many obstacles placed in front of them by the directors including adverse publicity.

Ballot papers are not confined to the election of directors but also include resolutions.  Members have a right by law to submit resolutions to the board.  However, the Nationwide Building Society set a precedent for all societies to reject all member resolutions by simply declaring that they interfere with the board’s management of the society.  Beware the board can put forward its own resolutions that are not necessarily in the interests of the members but may be in the interest of the directors such as a resolution to approve directors’ pay.

So when those papers come through the letterbox do not confine them to the wastebasket.  Use your votes but use them for yourself not for the directors and look out for a possible hidden tick box and never ever use the infamous “Quick Vote”.

Have the management of the Chorley Building Society produced the most undemocratic ballot paper of the year?

The front page presents the members of this society with one choice – the infamous “Quick Vote”.  It is a shame that the directors are not allowed to complete the voting papers themselves but they come pretty close to doing just that.

This one (Chorley Building Society) takes some beating!

Building societies are keen to get members to vote at their AGMs because it allows them to boast that they are engaging with their customers.

But some societies are underhand in their attempts to get members to vote. They do this by designing their voting forms in such a way that members can tick just one box rather than having to vote individually on a series of resolutions – from reappointing the society’s auditors to approving directors’ remuneration.

In using this ‘quick vote’ option, members may be saving time but they are simply handing over their voting rights to the society’s chairman. Of course, he will vote for all the resolutions.

Customers should ignore this and instead spend a little time reviewing the summary financial report and accounts they will have received. This will provide key details on the society’s financial performance and the directors’ remuneration.

Two  members of the Nationwide Building Society proposed to stand as candidates for the board and to put forward resolutions at the AGM in July 2016 but failed to obtain sufficient nominees.

They may try again next year but they need your support now.

For each of them to be nominated as candidates they require no less than 250 signatories.  Signatories must have been members for the previous two years with either a mortgage or savings or bank account with a minimum stake of £200.

They also propose to submit a number of resolutions and these require a total of 500 nominating signatories before resolutions can be submitted.

If you are willing to give them your support please contact the BSMA at info@bsma.org.uk. It is never too soon for the next AGM as it takes time to obtain the required numbers.